Pumpkin Pie Making or Pumpkin of Your Eye*

Over Thanksgiving my mom and I wanted to have an adventure.

So, we decided to...MAKE A PUMPKIN PIE FROM SCRATCH USING A PUMPKIN WE COOKED OURSELVES!! (I'm not shouting, just excited!) Yes we did!

How can they not with a beautiful pumpkin like this?

The pumpkin just knows it's about to become something very special...it can feel it in its bones, er, mushy insides. 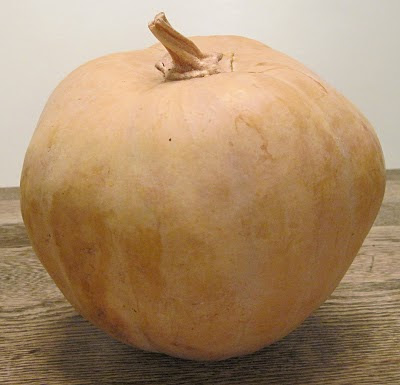 First, we cut out a little square shaped piece from the top, like thus: 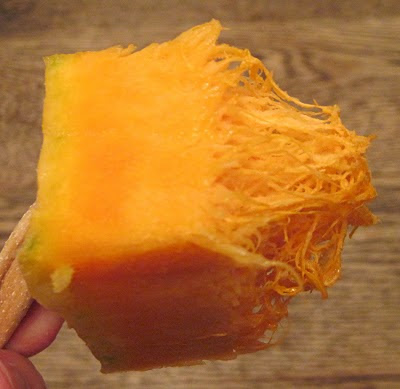 Then the pumpkin was cut in half and I took a picture of the gross looking insides. But, have no fear, things will get better...at least for a little bit. 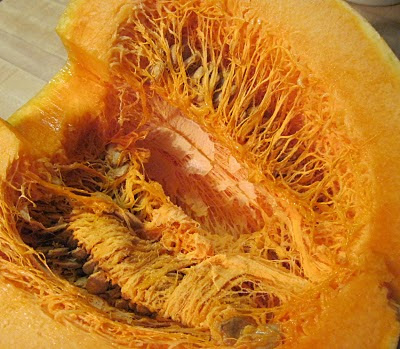 It was so fun, even the dogs wanted in on the action! 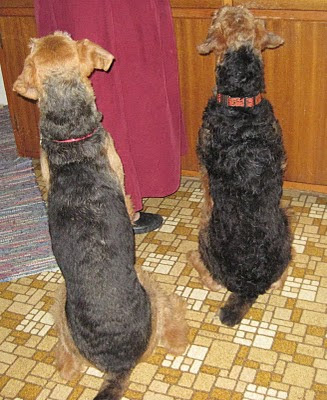 In order to make the pumpkin useful those gross looking insides depicted two pictures up have to be, um, taken care of...ahem... like so...

(Btw, if you try this at home try to get as many of the strings "taken care of" as you can, otherwise you might have a little trouble down the road...learn from our mistake). But, definitely scrape all the seeds out. 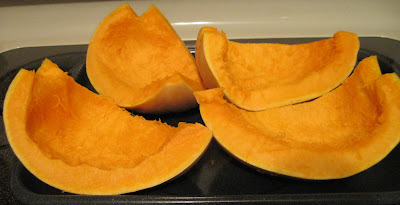 Once all the seeds and strings were out, we put the pumpkin in the oven at 425 degrees for about 45 minutes or until fork tender (it might take longer, just check on it).

While the pumpkin was cooking, I took pictures of myself to pass the time: 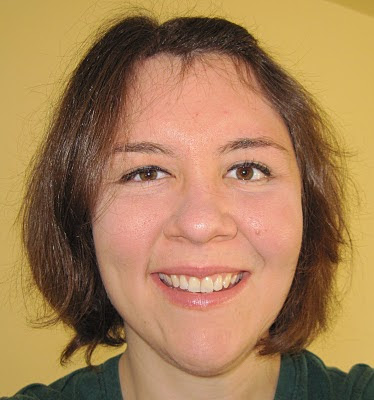 After the pumpkin was cooked the useful part of the pumpkin was scraped out. Be sure to get every last piece that you can...your eyes need it. They really do! Doesn't that look like pumpkin ice cream? So beautiful! 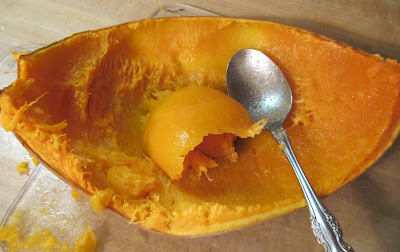 If you're not planning on using the cooked pumpkin right away, be sure to put it in a festive snowman container and store it in the fridge for later. 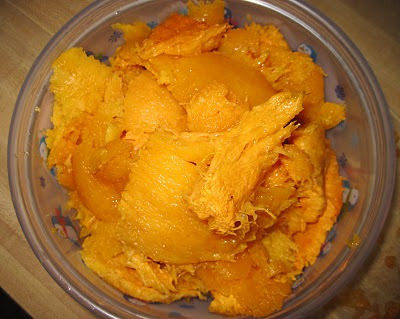 The above steps were easy enough, they sure were. Right?

Are you still with me?

This is where the fun part began...

See, Black Friday is a wonderful thing. Here is why...

Here is where the lovely thing thing known as *crazypeoplewhogetupat4amtogetgooddeals comes in (*more commonly known as Black Friday).

At Wal-Mart (Nast) there was a super crazy deal (or so we thought) of a little 1.5 cup mini chopper for $1.97. Well the problem is I am not on of those crazypeoplewhogetupat4am on the Friday after Thanksgiving and neither is my mom.

So, we didn't get the super crazy deal on the little 1.5 cup mini chopper because when we went they were all sold out.

But, all was not lost. We found another little food processor that could hold three cups and was a little more than $1.97, but we thought it would work so we bought it!

And then we took it home and tried to use it...and...it didn't work! (Partly because it didn't have instructions and partly I think because it was defective).

Yay! So, we went back to Wal-Mart and exchanged it for another one exactly like it (instructions included), only hoping that it would work this time...

It worked alright, but not to puree pumpkin.

We had to mash the pumpkin with a fork before we put it in the food processor...what is the purpose of that?

Isn't a food processor supposed to eliminate that step? 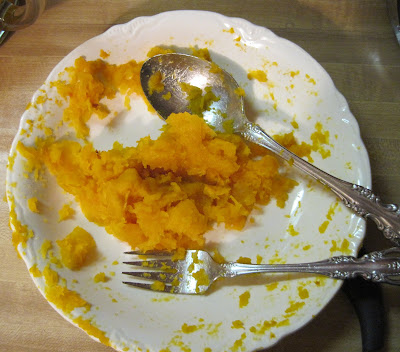 Anyway, it was mashed with a fork and then put in the processor. But since it was not very expensive there were two buttons: "HI" and "LOW" and we had to stand there and push them down while the food was being processed. We couldn't go and do something else...

Which, when I say processed, really means not very processed. We had to add a bunch of water and after about 20 minutes we got not quite 1/2 cup of pureed pumpkin.

I just thought it would be faster than that is all I'm saying. And more processed. 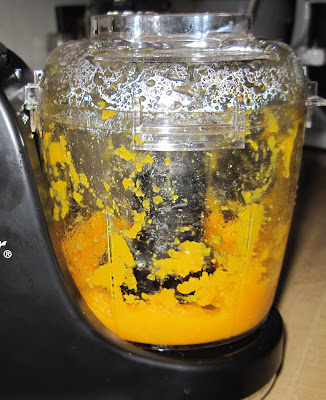 (I hid the brand name so as to not cause any panic, but it ends in an r).

Two hours later we had finally finished processing all the pumpkin. Whew!

That part definitely made for good memories. My mom and I started laughing about half way through!

On to the baking part...

The Crust:
Instead of making regular pie crust, we used phyllo dough, you know, to cut calories and all. It turned out pretty well, if we do say so ourselves.

(Word to the wise...if you've never worked with phyllo before, be sure to read all the instructions on the box before beginning. Phyllo is pretty temperamental). 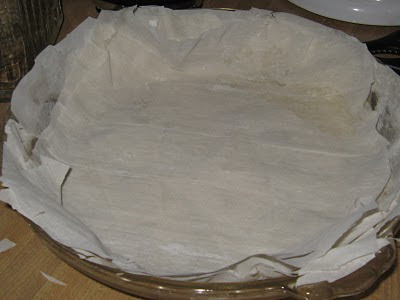 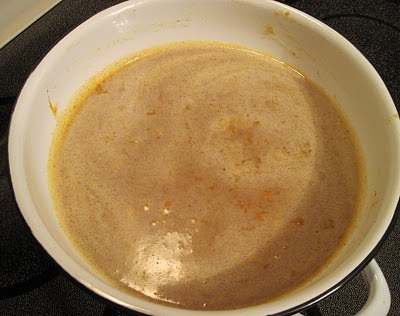 See the little chunks in there? Those are from the food processor that doesn't really work to make pumpkin puree.

The two were combined: The Crust + The Filling = Homemade Pumpkin Pie! 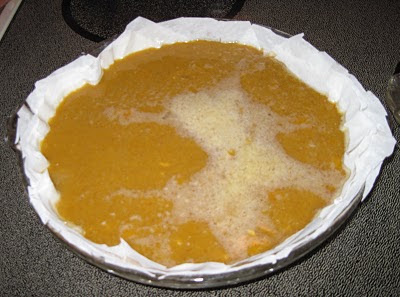 We made two pies. See the different milk designs? They both kind of resemble horses...or maybe a galloping horse and a unicorn (if you turn your head to the side)? What do you see? 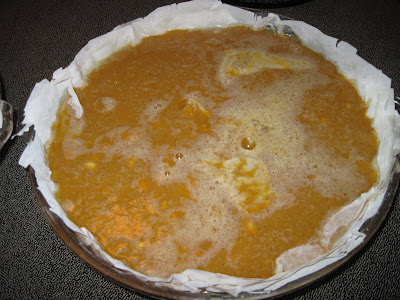 With the pies in the oven we waited with anticipation... 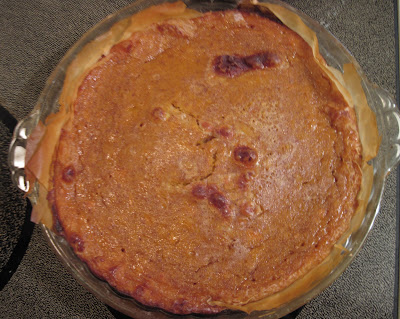 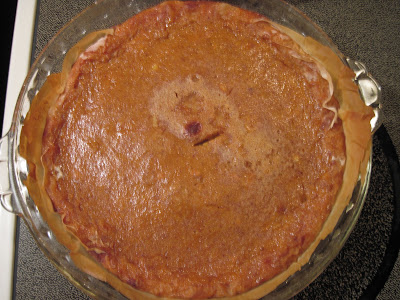 How did it taste, you ask?

And that, my friends, is our adventure in home made pumpkin pie making!

And just to avoid any confusion, we have made home made pumpkin pie before but this was the first time making it using our own pumpkin and phyllo dough- usually it's just the canned pumpkin and regular crust.

*Why is it always apple of your eye? Why don't people ever say pumpkin of your eye?
Posted by Natasha and Jesse at 2:17 PM

If you include the gas to Walmart and the Cost of the Food Processor it would have been better to use Libbys. LOL Bet you had fun....

I'm still trying to decide if the home-made pumpkin pie tasted pumpkinier than the pies with canned pumpkin. We'll have to try it again at Christmas! Fun post.

You guys are brave...and amazing!

I just wanted to say thanks for stopping by and leaving such a thoughtful comment on my blog.

Have a great day!

Claudia- I'm pretty sure you're right, but it was for sure fun!

Nancy- Yeah, I'm not sure either...but I do know it tasted good!