Write It On The Film

Recently, my mom and I were looking at an old photo album which belonged to my Great Grandmother. As we were looking on the backs of the photos, we noticed that many of them had been postcards which were cut down or had been ripped out of a previous album. None of the photos, save one or two, have information about who is in them or when or where they were taken.

Below is one such photo. 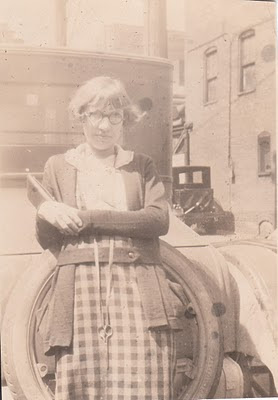 From the picture, we learn that this woman is leaning against a car and holding a notebook of some sort. She has a pair of scissors hanging by a thread around her neck. We guess that this might be my Great Grandfather's sister, Bertha, because she was a seamstress and perhaps the scissors are a clue to that?

Any clue as to what year the cars might be? 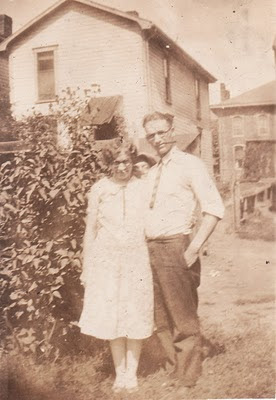 I assume that this couple is married because, if you look at the photo on the left, the woman has a ring on her finger. But, we don't have any further information about them.

Were they vacationing when these photos were taken?
Was one of houses the house that they lived in?
In the photo on the right, did you notice the person jokester peeking up behind them in the center? Is that a younger brother or a neighbor? Or perhaps it's a son?

I'm guessing it is around the 1920's according to her hairstyle, but if this is Bertha she died in 1918 at age 29. The man is wearing a very short thin tie and has a cigar (which was common for men anyway!). They both have a similar style of round glasses- which are the same glasses the woman is wearing in the first photograph. I also love the man's checkered socks in the photo on the left! Very stylish!


This photo is also of the same couple, but at a later date because she looks older. Were they camping when this photo was taken? Or maybe they were just out for a Sunday stroll... They must have been with someone else, because who would have taken the picture? I notice there is a pond behind them. 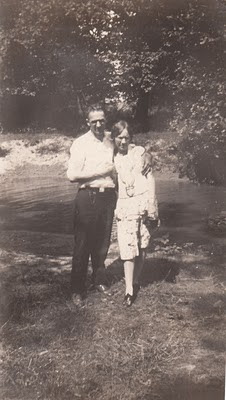 If only...they had written it on the film- at the time.

All these questions, but so few answers. A few minutes for them to write down names and dates would have saved us hours of investigation. 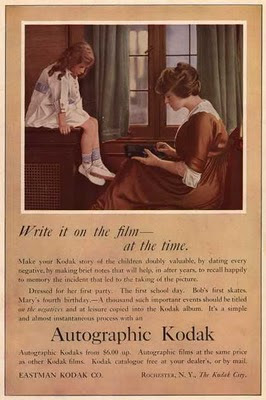 Thanks for visiting my blog!

So fine photos and so sad a lack of those knowledges!
But it is same thing in many photos of my old albums.

Greetings from Finland and very good weekend to you!

Fascinating peek into this woman's life in its many stages. Photos tell us so much and then leave us with more questions than ever.

Fun, speculative post. Those are THE dandiest socks I think I've ever seen!
They sure do look happy and well-dressed. I'm guessing the Aunt Bertha theory is a good one. I'd be on Ancestry.com in a heartbeat to see if anyone else has photos of them up there.

This is a test (because I can't remember if I actually posted the last one).

These photos are so intriguing and interesting. Funny how so often the unknowns create such fascinating stories in our minds. Bertha looks like a fascinating character. I think I would have liked her. I also adore those socks! Now that's a man not afraid to be himself!

Welcome to Sepia Saturday. Lovely to read you today.

Yes, this is one of my frustrations, too! I spend hours writing out captions on the back of photos. With digital photography, there is an even bigger problem, because we take so many photos. Often people don't make prints or back up their photos. I wonder what we will leave for our great-grandchildren?

I would guess the first photo was in the 20s from her bobbed hair and dress. The second looks like the 30s with the crimped bob.

I have several unidentified photos, as well. Makes you want to write the names on every single picture you take, doesn't it?

Those socks are the cats pajamas and nearly match the pattern of her bobbed hair! Great fun couple.

Leena- Thank you for visiting. I've learned that for my relatives in the future, it will be so much easier if I write on my photos!

Barry- You can say that again. Even if they had labeled the photo, there would still be questions unable to be answered. Thanks for your comment.

Poetikat- I had not thought to check ancestry.com for photos. Thanks for visiting!

Nana Jo- Thanks for commenting. She does look like a fascinating person and I love his socks too!

a.k.a Olivia- As a photographer, I was wondering what your thoughts on this might be. I need to do better about labeling my photos. My mom and I were talking about the digital photography and how it's great, but it does create so many photos.

Willow- I was wondering about the 30s in the second photo, but it might not be Bertha then because she died in 1918. So many questions! I need to be better about writing out the names! Thanks for your comment.

Tattered and Lost- Ha, the socks do almost match the pattern of her hair. Thanks for your comment!

what beautiful photos! I hope you can find out some more about who she is. She is beautiful. Looks like she was very happy as well. I love her hair and they are both stylish indeed! I love going through old family photos too. Most of mine do have some information on the back of them, but not all do. I try to remember to be detailed with my photos so my kids can look back one day and have as much information as possible! Thank you for sharing and I hope you are having a nice weekend!

Well, if it isn't Bertha, does she have a sister or is there another woman in the family this person could be?
I was interested in the bob and when it originated. I found this website (http://www.hairarchives.com/private/1920s.htm) which says it first came into being during the Great War. Maybe "Bertha" was ahead of her time?!
I hope you or someone in your family can figure out who this person is.

Great photos and perhaps the second set are of a sister, cousin, daughter????I know the frustration of photos of folks when we know not about them...you have done a good job speculating at least....I label our digital photos on line when I transfer them....interesting photos anyway! & oh oh those socks.!!

This is a good reminder to always label photos. In any case, she looks like a lot of fun, and so does he for that matter. Not just anybody would wear great socks like that. i bet they went out dancing and were the life of the party.
P.S. That face in the background is very strange. Can't quite figure it out. Almost looks like a cat.

Hi Natashia.Some great photos and mystery.It sounds like you have a handle on the settings in which they were taken.
Its one of the perks of Old Age (be it "in the flesh" or in photos) to keep the Young 'Uns Guessing!

As I dig through my piles, every once in a while that I find a first name that gives me a clue to all of the other photos of that same person. It is funny my mom, if living, could rattle off the name instantly. It is all so interesting, even if you don't know the names.

Awesome post! I kinda like the mystery of old photos. It would be nice to know the truth though. Lots of great comments here! Good luck!