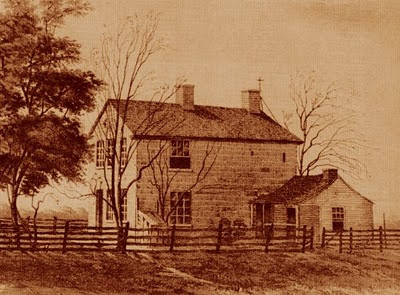 June 27th, 1844
"May I refer to a modern “last days” testimony? When Joseph Smith and his brother Hyrum started for Carthage to face what they knew would be an imminent martyrdom, Hyrum read these words to comfort the heart of his brother:

“Thou hast been faithful; wherefore . . . thou shalt be made strong, even unto the sitting down in the place which I have prepared in the mansions of my Father.

“And now I, Moroni, bid farewell . . . until we shall meet before the judgment-seat of Christ.”

A few short verses from the 12th chapter of Ether in the Book of Mormon. Before closing the book, Hyrum turned down the corner of the page from which he had read, marking it as part of the everlasting testimony for which these two brothers were about to die. I hold in my hand that book, the very copy from which Hyrum read, the same corner of the page turned down, still visible. Later, when actually incarcerated in the jail, Joseph the Prophet turned to the guards who held him captive and bore a powerful testimony of the divine authenticity of the Book of Mormon. Shortly thereafter pistol and ball would take the lives of these two testators.

As one of a thousand elements of my own testimony of the divinity of the Book of Mormon, I submit this as yet one more evidence of its truthfulness. In this their greatest—and last—hour of need, I ask you: would these men blaspheme before God by continuing to fix their lives, their honor, and their own search for eternal salvation on a book (and by implication a church and a ministry) they had fictitiously created out of whole cloth?

Never mind that their wives are about to be widows and their children fatherless. Never mind that their little band of followers will yet be “houseless, friendless and homeless” and that their children will leave footprints of blood across frozen rivers and an untamed prairie floor. Never mind that legions will die and other legions live declaring in the four quarters of this earth that they know the Book of Mormon and the Church which espouses it to be true. Disregard all of that, and tell me whether in this hour of death these two men would enter the presence of their Eternal Judge quoting from and finding solace in a book which, if not the very word of God, would brand them as imposters and charlatans until the end of time? They would not do that! They were willing to die rather than deny the divine origin and the eternal truthfulness of the Book of Mormon."

"I want it absolutely clear when I stand before the judgment bar of God that I declared to the world . . . that the Book of Mormon is true." Jeffrey R. Holland

I know Joseph Smith was a true prophet. I know he translated the Book of Mormon by the power of God. I know it is the keystone of our religion and I know that as we read it it will bring us closer to God than any other book.

Have you read the Book of Mormon? Would you like a free copy of it? Go here and scroll down to the bottom of the page and click on "Request a Copy" under Book of Mormon. I know that as you read it and pray about it you will gain a truthfulness of the message that you read. It is true, I can't deny it.

i almost cried, for a third time, reading that quote. because i cried the first time i heard him say it, i cried a second time listening to it again about a month ago. i LOVE it. and i love you:)

Thank you for sharing your testimony. It sure brightened my day.