Let's play a game of guess who. Ready?

This person has a little (and by "little" I mean pretty big) blog where she talks about her "bizarre beautiful and often very weird" life as the wife of a cattle rancher. She blogs about her Bassett hound with turtle breath and her husband's Wrangler clad behind...

It's The Pioneer Woman! 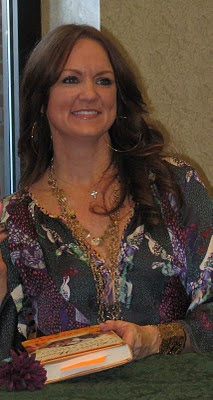 Yes! She recently published another book, Black Heels to Tractor Wheels, which is the story of how she met her husband, Marlboro Man. This weekend I had the chance to meet her in Columbus for the book signing!

I found out she was coming about a month ago, and since I didn't have any official days off work in February I decided to take a day off and drive up to Columbus to visit with my family and also see Pioneer Woman.

The best of two worlds in one visit!

Ree was scheduled to be at Barnes and Noble at 2pm and we got there around 1:30 or so. She came alone and the place was packed. It probably would have been even more packed if Marlboro Man was there and people knew about him coming too. 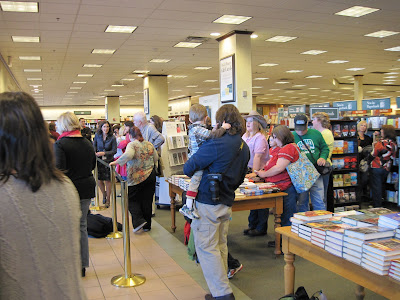 (This is just a tiny bit of the crowd)
The kind people at the bookstore handed out tickets which determined where you would be in line. I was "white c" which meant I was at the very end of the line. This also meant I would be there for a good while. 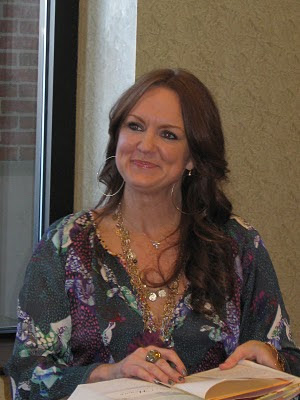 I was talking to a few ladies who had driven down to Nashville the weekend before to see her and stood in line for 6 hours! I wanted to see her, but was really hoping I wouldn't be there for 6 hours.

As I stood around getting photos and just waiting for my turn, a woman came up to me and asked if I was in line. I said yes and she said "here you go (and handed me some tickets), you can have these because we're leaving." They were yellow tickets which meant I was practically next- they were almost to the end of red, you know, color order wise. I asked her if she was sure, she said yes, I thanked her and she left. Wow, my turn was coming up faster than I thought! 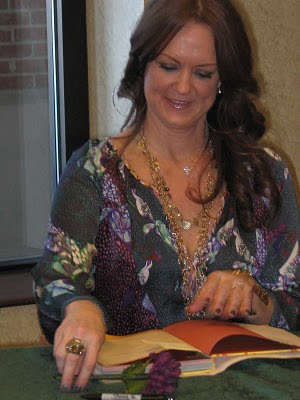 With her purple flower pen and shellac nail polish
When they called yellow, I stood in line and thought of what I wanted her to write in my cookbook.

I saw people go in front of me as I waited. 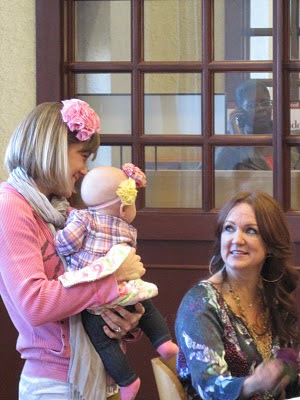 We all know her love for babies. Her ovaries were probably doing somersaults.

Her "handler" (which is the name they gave the guy who came with her...it sounds like an animal trainer doesn't it?) took my book and handed it to Ree. It was my turn!

I had a list of questions I was going to ask. Such as:

Is Cowboy Josh really single?
If so, what's his last name so I can look him up on facebook?
Do you smell Charlie's Frito paws every day?
When are you planning on doing The Ranchelor?
How do find time for everything you have to do? Photography, blogging, cooking, ranching, homeschooling your kids, finding time to be with your husband...painting your toenails?
When do you practice your Ethel Merman impersonations?
Do you ever sleep?

But I just ended up asking... How's Charlie doing? "He's great! I'll tell him you said hi" was her response. Then she said "Natasha, right?" and wrote what I wanted her to in my book. 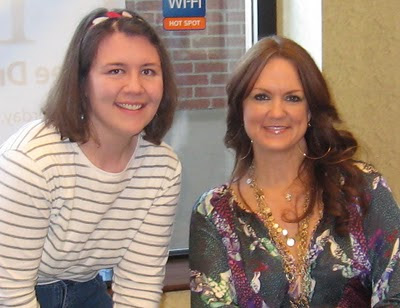 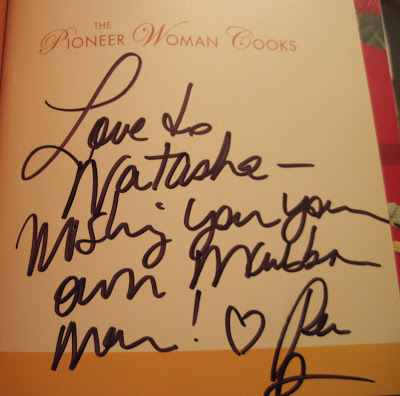 In case you can't read it, it says: "Love to Natasha (she put the "love to" part in)- Wishing you your own Marlboro Man! (Heart) Ree D."

It was so fun to see her and have her sign the cookbook. She was really down to earth. I just wish people had more time to spend with her.

What a fun day!

And now, for your pleasure, I found scraps of fabric with cowboys on them and I think they relate pretty well to PW's life, don't you think? 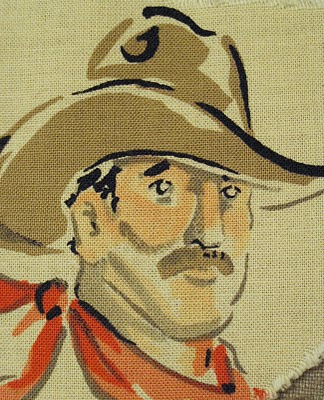 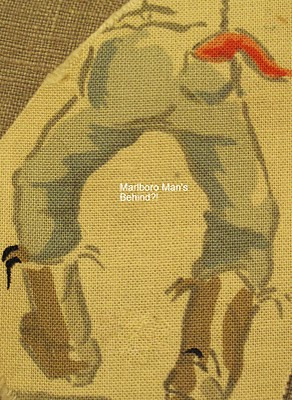 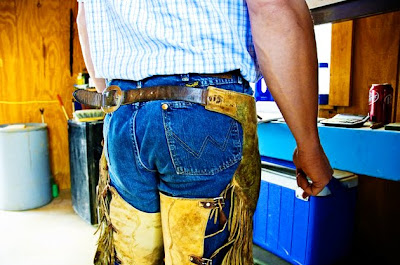 Photo from here
You've reached the bottom of this post, heard the behind the scenes version, and now that's the end of my story.

Did Pioneer Woman come to your town?
Posted by Natasha and Jesse at 7:34 PM

So jealous! I wish I'd known she was in colomubs... I'm so out of the loop though. I didn't even know the book was published yet. You're so lucky!

This is so fun! I love what you asked her to sign in your book- what fun! That's would I would wish for too. . . I think.

Loved your recap! And you totally lucked out on the yellow cards.