Shortly after the new year started, Target was having a sale of certain TV shows on DVD for a really good price. I mean really good! $14.99 good! There was a "Season One" of one particular show that I wanted but when I went to the store they were sold out. It made me sad, but I got a rain check for it and decided I would come back and try again another day.

Two days later, I went back to the store. I looked around. Nope, still no copies were to be found. I figured I just wasn't supposed to have it. Then I decided to browse around in the books. I picked up several books that looked interesting- read the front and back flaps and put them back. Then I saw one book that really normally wouldn't interest me but picked it up anyway... well, when I picked it up guess what was behind it!? Yes, a very copy of the DVD I had been looking for!

I was shocked to say the least. The cover was a little bit torn, but I grabbed it anyway. Then I walked around the store deciding whether to officially buy it or not- this was my birthday money (from September) I would spending on it after all. After browsing for about 1/2 hour I decided I would buy.

The DVD season I bought? 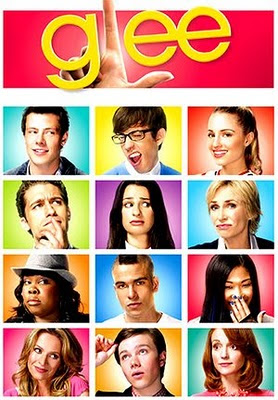 P.S. Don't judge me too harshly for liking this show. I really like musical theater and since I don't have a chance to go very often this fulfills that need for me.

P.P.S. I still had birthday money left over!
Posted by Natasha and Jesse at 11:11 PM

That was a nice belated happy birthday surprise! Enjoy!

Glee is my guilty pleasure. I also love it for the musical theater angle - some of the storylines are terrible! But I almost always love the music.

Glee is the pleasure I wish I had time to become addicted to. Sad, isn't it. I loved their Christmas album and am going to buy their music. How is it? THe show? Really, I wanna know?