From Penny Lane to Abbey Road

I don't precisely remember when it started, but I think it was around my 12th birthday. I had asked for a CD player for Christmas- you know, the big kind with the handle. Well, Christmas came and I received the player. Along with it came a CD of Beatles music "The Beatles/ 1967-1970" I was hooked. Ever since then, I've really enjoyed the Beatles.

Plus, I can't get enough of that Paul McCartney...he's a cutie!

So, in tribute to The Beatles and John Lennon's birthday today....

History of The Beatles by their hair... 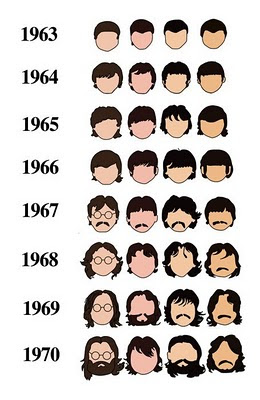 In case you don't know, from left to right they are: John, Paul, George, and Ringo. As time went on facial hair and glasses became popular.
Image via

If so, do you have a favorite song or a favorite Beatle?
Posted by Natasha and Jesse at 5:30 PM

I don't know what song is my favorite as I have several…I do love a lot of Lennon's stuff and Paul's stuff when he was with Wings.

okay. i love love love the beatles. happy unbirthday, john! and i was so proud of myself for knowing who was who before reading you telling. :) anyway...i was always a sucker for paul and john. george was just not my cup of tea and to be honest, ringo kinda freaked me out. lol. i always thought john was hilarious in the movies and paul...who doesn't love paul?? as for a fav song, i might have one on every album? maybe? there are so many good ones to choose from...