No, let me rephrase that. I love Nauvoo. This past Thursday through Sunday (the 21st through the 24th) we had a regional young single adult activity in Nauvoo.

Wow, what to say about it. Really, if you haven't been to Nauvoo you should definitely make plans to go. Soon! You really don't know what you are missing. The spirit is so strong. The testimony and faith of the early saints is still very much alive. I'm grateful that I was able to attend an endowment session in the temple, it is so beautiful. I echo what Joseph Smith said as he was leaving Nauvoo to go to Carthage: "This is the loveliest place, and the best people under the heavens...." 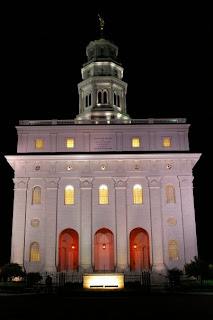 As I walked along the sacred path known as the "Trail of Hope" located on Parley Street, which the saints walked as they left Nauvoo and crossed the Mississippi River onto the journey west, I read the accounts from the jounal entries of some of those early saints. What faith they had, knowing that they were leaving behind their beautiful temple and the city they had built to go west. I learn much from their example.

I love the quote by Bathsheba Smith on one of the plaques: “My last act in that precious spot was to tidy the rooms, sweep up the floor and set the broom in its accustomed place behind the door. Then with emotions in my heart, I gently closed the door and faced an unknown future, faced it with faith in God and with no less assurance of the ultimate establishment of the Gospel in the West and of its true enduring principles, than I had felt in those trying scenes in Missouri.”

They had faith in God and with the power of their temple covenants burning in their hearts they knew all would be well despite the unknown hardships that were to come.

This is a scene similar to which the saints had as they walked down Parley Street and looked back on their beautiful temple for the last time. 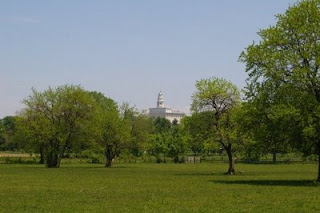 The senior missionaries serving in Nauvoo are wonderful. When I'm older and I serve a mission, I'm going to Nauvoo. Not that I really have a choice, but if I did, I would go to Nauvoo. Actually, I would keep sending in my mission papers until I got called to Nauvoo! The two performances that we saw, we actually saw three, but the two main ones "Rendezvous in Old Nauvoo" and "Sunset by the Mississippi" are both wonderful. Rendezvous is performed by the senior missionaries and is a musical comedy and drama about life in Old Nauvoo. Sunset is performed by both the senior and young performing missionaries (who are in Nauvoo only for the summer) and is hilarious by the way, just in case you need another reason to visit. It is a show of songs, music, stories and dances of the Nauvoo era. Really wonderful!

As Elder Taggart, who is an area authority seventy, said in a fireside to us "You can't have a fond memory of something you never did." I will definitely cherish my fond memories of Nauvoo.

Thank you for recounting what Bathsheba Smith said about cleaning up the house as she left. I think if I were leaving, and doubted that anyone would be coming to that same place soon I probably wouldn't care what it looked like. It is incredible to think of all that the pioneers went through.

I, too have seen Sunset on the Mississippi. Even though it was a few years ago, I remember it was terrific! Thanks for your insight.

Yes, Nauvoo is wonderful. That's too bad we missed you there. Take care! - Michelle & Ryan