Oh, what do you do in the summertime?

I've been really bad at blogging. I always think "Oh, I should write but I'll do it later" then later never comes. Anyhow...I thought I would write about some of things I've been doing so far this summer.

These are some of the things that I do in the summer time: 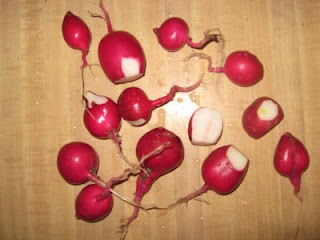 Plant a garden. We finally have some vegetables that are ripe in the garden. Some radishes were picked today. Some of them were quite huge (and spicy too, whoo!). We also canned four jars of cherries from the two trees in our backyard with more to come. This year we got them before the birds. The lettuce is ready and the tomatoes and peppers are also starting to come up. The squash plants have little squash flowers on them. These are our canned cherries. 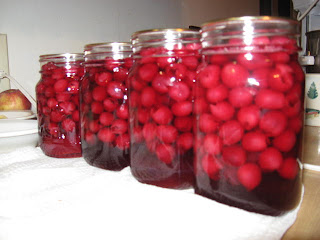 Go swimming. I'm working as a camp counselor at a Jewish summer camp. I work with two other counselors and we have about 12 five year olds that we take care of. They can be quite a handful sometimes but are so fun to work with. We go swimming twice a day. They have swimming lessons in the morning and free swim in the afternoon.

There are three girls in the group and they always want to play "shark" with me during the free swim. They pretend they are going to attack me and I have to swim away. Once they catch me, I get to be the shark and try to catch them. Another game they like to play is "touch the rope." There is a rope which divides the shallow end from the deep end. They like to have me swim them over and let them touch the rope. They each stick their little pointer fingers out and quickly touch the rope and are ready to go back. It is so cute. For those of you that have seen Finding Nemo it reminds me of the part where they race out to touch the "butt."

One of boys told me the other day that one of his favorite movies was Kung Fu Panda and he said I "definitely have to watch it on the IMAX screen!" I would love to put pictures up but, unfortunately, I am not able to because of privacy reasons.

Volunteer at Special Olympics. My sister and I volunteered for the Special Olympics yesterday which was actually Saturday the 28th. (I started this post on Thursday). We helped with the aquatics. Some of the people are so funny. Some of them are also very flirty. So flirty in fact, that one guy offered to be my boyfriend! After each group swam they had a little awards ceremony. They went onto a stand much like the real Olympics and received their medals and had their pictures taken. It was really fun. The Olympics were held at OSU and I'm surprised at how many different events they had. Some of them included gymnastics, volleyball, swimming, and track.

Eat fruit. I LOVE summertime fruit. There is such variety during the summer and it all tastes sooo good.

Listen to the rain and watch the thunderstorms. It has rained during the past three days. Usually it only lasts for 45 minutes or less but I still enjoy it. I miss having a big porch to sit outside and watch them.

I tried moving the pictures down and I became frustrated, so they're staying right where they are. I put the cursor where I wanted the pictures and after I downloaded them they didn't end up where I wanted but went to the top of the post instead. Argh...

This is a little bit of what I have been up to lately. What do you do in the summertime?
Posted by Natasha and Jesse at 10:21 PM

Love those cherries. Beautiful. I do some of those things too.

Moving pictures down. I click on the picture or select or highlight (I don't know what to call it.) Then I say right click cut and then put curser where I want it and say paste. Best way I have found.