Only 3 posts for the month of May?

In my defense, I have been busy with other things. Good things- very good things, so don't judge too harshly.

Here's a little recap (sorry...no pictures because I'm at work):

1. This past Saturday I moved into a new apartment.
2. Jesse and I did some important shopping.
3. Said new apartment doesn't have internet. Thusly also related to the lack of posting (and pictures).
4. Jesse and I will be going home to see my parents this weekend for Memorial Day. I'm so excited!!
5. I've almost unpacked all my boxes.
6. Jesse is so good at Clue. He beat me 7 times, but he let me beat him twice in a row last night (and then I let him win once!)
7. He's so kind.
8. I sure love him!
9. I'm so grateful to call him mine.
10. I miss him when I'm at work.

Sorry for the overflow of emotion in this post.

Have a happy Wednesday!
Posted by Natasha and Jesse at 12:43 PM 7 comments:

I had a busy, but fun weekend.

My weekend started on Friday night when I went to help Jesse at The Arboretum.

The Kentucky Children's Garden (different post with pictures coming soon!) is opening this coming Saturday, May 14th and he still had lots of work to do before it opens. I wanted to spend time with him, so I offered to go help.

We unwrapped (about 75?!) ferns and trees that had just arrived that day (they were a retirement present for one of his co-workers), dug up plants and put them in containers so they could be planted in the children's garden on Monday, rode in a golf cart, ate freshly picked strawberries from his plants, held hands, and enjoyed each others company. I arrived about 6:30 and we left at about 9pm and went to Subway for dinner.


Then on Saturday morning, some members of our branch helped tear down a dilapidated shed for a sister in a different ward. 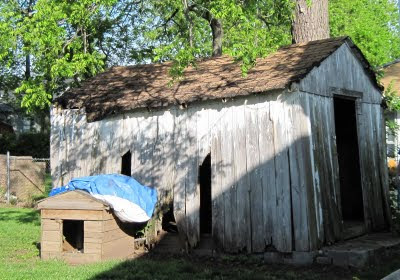 Hard at work. (I helped too, I just stopped to take pictures). 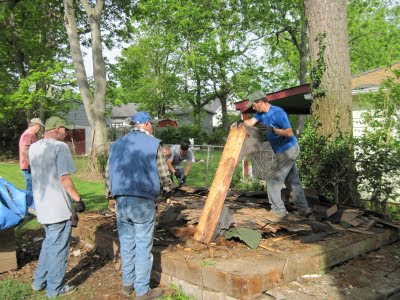 Bringing down a side 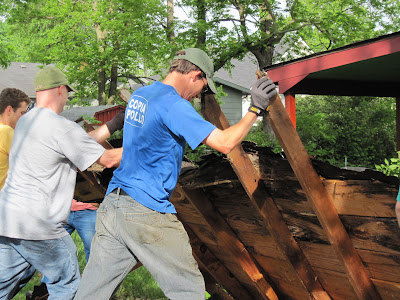 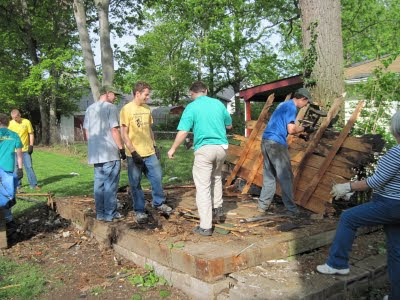 The whole group (Jesse and I are both in this picture, btw) 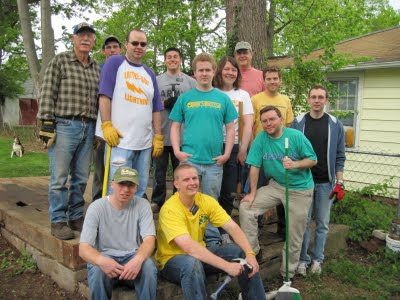 We got there at 9am and by 10:45 we were at Steak n' Shake enjoying pancakes. Many hands make light work!

Ok, that was part one of my Saturday....

Part two of my Saturday consisted of a two-part date with Jesse.

After we finished tearing down the shed, Jesse had to go pick up some things for the Arboretum. The plan was that he would pick me up at 2pm when we would do something fun and then eat dinner.

About 12:30pm I got a text from him asking if we could change the time to 3pm- which was fine by me. Then about 1:30 he called asking if I was ready for a crazy afternoon and could we switch it back to 2 pm- the missionaries had called asking if he could go teach with them (which he wanted to do) but he also wanted time for our date.

So, he picked me up at 2pm and we went mini-golfing at a Bible themed golf course. 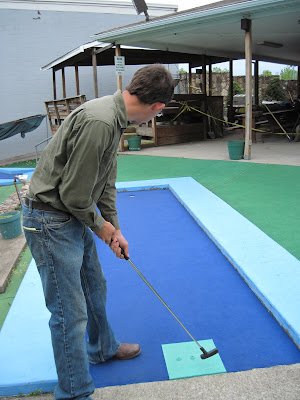 It started raining about 3pm so we sat inside until the rain let up, then played again. I beat him three out of four games. It must have just been beginners luck!

We got done around 4:30, he dropped me off and then went to meet with the missionaries.
After the discussion he would pick me up again at 7pm for dinner and we also wanted to take some plants to a member of our branch presidency who is ill.

Around 6:45pm I got another text asking if we could change it to 7:30 since the discussion was going over.

He arrived before 7:30 and then we were off to Walmart for the plants. We picked up an Endless Summer hydrangea, a tomato plant, and a card. Then went to dinner at Fazoli's.

After dinner we drove to Georgetown and dropped off the plants and card- we were hoping to visit, but all the lights were out so we just left them on the porch. On the drive back, we got some more hand holding in, which is always a bonus! :)

It was a really good, but busy weekend!
Posted by Natasha and Jesse at 9:22 AM 3 comments:

Thank you for teaching me almost everything I know. 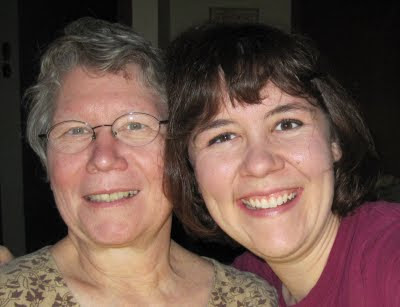 Happy Mother's Day. I love you!
Posted by Natasha and Jesse at 8:40 PM 5 comments:

Because, you see, I have been dating someone lately and that has been taking up most of my time.

And there you have the reason why I haven't been blogging.

By the way- his name is Jesse, he makes me laugh, and he's the cat's meow.

I have some more posts coming up (hopefully shortly), I just have to get pictures uploaded for them.
Posted by Natasha and Jesse at 11:54 PM 10 comments: