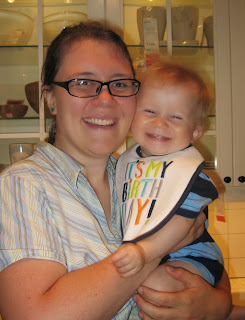 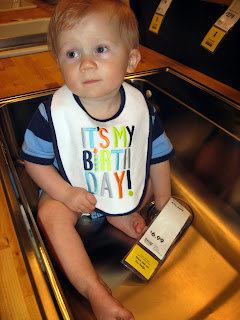 He really enjoyed sitting in the sink (though this photo doesn't quite show that).  This sink would be perfect for baths! 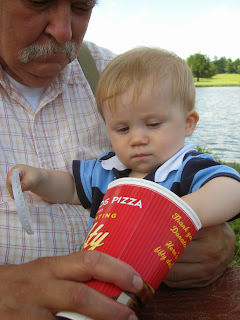 This was taken on June 19th (one week after his birthday).  Mali and my sister's birthdays are one week apart (different years, of course!) so my parents came down to celebrate her birthday as well.  We were at a park where we ate lunch. 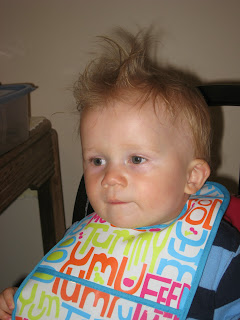 Mali had a cake on his actual birthday, but sadly my parents and sister weren't able to see him eat it.  So I decided to make him another cake and we gave him it to him when my parents came back down for my sister's birthday.  (His hair was kind of long and he was kind of sweaty so my sister decided to kind of spike it up!) 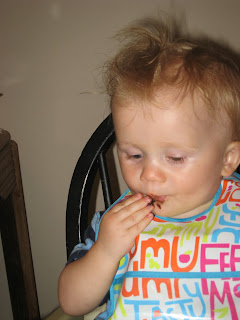 Here he is trying the first bite.  He was more willing to eat this one than his actual birthday cake! 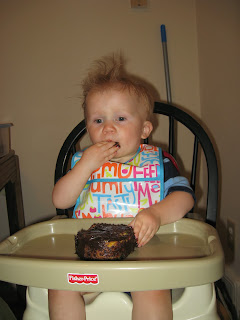 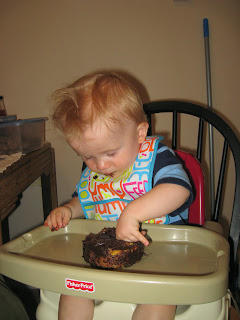 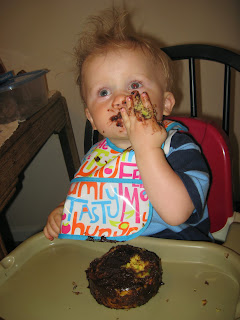 He is sure enjoying it! 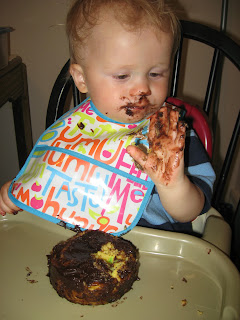 He's waving in this one...!  I think he is also admiring his cake-y hands as well! 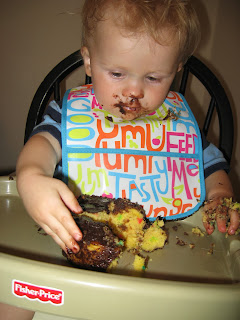 He looks so serious!  But he is definitely enjoying the cake. 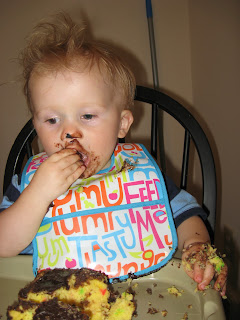 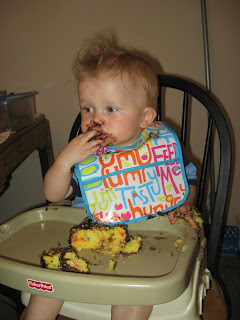 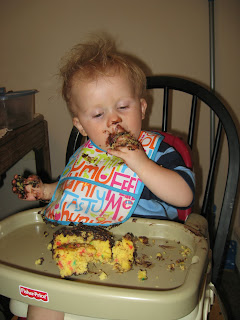 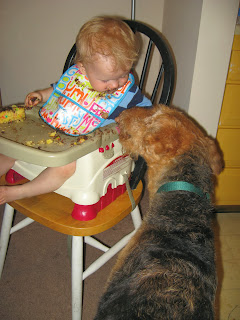 He is really good at sharing! 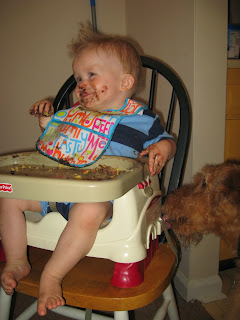 "Yum!  That was delicious cake!  I'm stuffed!"  (He didn't eat the whole thing- he had eaten about half of it when I took the rest away because I could just imagine a sugar coma in the making).

My sweet baby!  I love him so much!  And time really does fly.  I can't believe as of this blog post, he is almost 16 months old (in about two weeks).

Hopefully you enjoyed these photos!  I will try to post more soon.

Posted by Natasha and Jesse at 11:56 PM No comments:

Guess who turned a year old?

My sweet baby turned a year old on June 12th. (This post is late!)  Oh, my heart!  He is growing up so fast it makes me wish I could slow down time.

On his birthday, Malachi's grandparents (my parents) came down and we all went to IKEA to celebrate.  He had fun, but didn't nap during the day so he was exhausted by the time we got back home.  He opened his presents then he had a mini cake.  He wasn't sure what to think of the cake at first- I had to put some frosting to his lips...then he bent his head down and got frosting all over his face!  It was so funny.  Photos coming soon....

Now at 14 months, Malachi...
::  Has 8 teeth- 4 top and 4 bottom.
::  He has an infectious laugh.  He is such a happy baby toddler.
::  He loves to give hugs and kisses.  Any time I ask for either he willingly obliges!
::  One of his favorite times of the day is when Jesse comes home from work.
::  Is weaned, but still periodically asks to nurse.  It makes my heart break to tell him he has to drink cow's milk now.
::  Loves to climb on and off the couch.  I've taught him how to climb down safely (feet first) but it still makes my heart jump when he's on the couch.
::  Sometimes takes only one nap during the day.
::  Does really good at taking bites of food and chewing.
::  His favorite foods are cheese (which he could eat all day if I let him), tomatoes, yogurt, cucumbers, and all fruits, especially berries and bananas.
::  He is a walking pro!  He started walking about a week before he turned 14 months and he is doing so well!  I love the happy look on his face when he's toddling around!
::  He still sleeps with his hands behind his head and his elbows sticking out.  I hope he sleeps this way until he's 10.
::  He drinks out of a regular (adult) cup.  I tried a cup with a spout (i.e. sippy cup) and he just preferred a regular cup, so that's what we've stuck with.
::  He knows a few words:  "ma ma", "da da", "dig", "tickle" (which he says together like, tickletickletickle!), "up" and "yum".
::  He also knows some baby signs:  "food/eat", "more", "milk" and "all done".  I'm working on a few others with him.
::  He's learned the fun of talking into a fan and hearing his voice get all choppy!  It is so cute to watch him.
::  He loves bath time!  We're still working on him sitting during baths though.
::  He got his first haircut from Jesse on his 14 month birthday.  There was lots of movement (on his part) and bribing (on our part) involved, but it got done.  I saved pretty much all his hair...
::  I'm pretty sure he gets tired of me giving his cheeks kisses almost all day long.  I just can't help it!  They will only be baby cheeks for a little while so I have to get the kisses in while I can.

He is growing up so fast and there is nothing I can do except enjoy every minute!  I love my sweet baby!
Posted by Natasha and Jesse at 3:56 PM No comments: