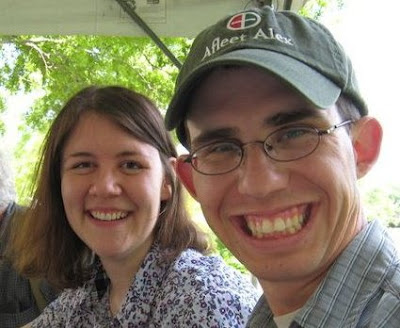 The following converstation took place yesterday as I stared at Jesse while he was eating a hot dog:

Mr. Dahl: "What are you thinking about?"
Me: "Just how much I love you."
Mr. Dahl: "Oh, brother."
Me: I start laughing and cover up my cheeks...
Mr. Dahl: "Why are you blushing?"
Me: "I don't know, I guess because you said 'oh, brother'..."
I keep looking at him as tears well up in my eyes and start to roll down my cheeks
Mr. Dahl: "I said 'oh, brother' to make you laugh."
Me: "I know, I'm not crying about that but because of how much I love you."
He stops eating, gets out of his chair and stands behind me and hugs me.
Mr. Dahl: "I love you too- so much. But no crying!"

I have been craving a bagel with lox and cream cheese for almost my whole pregnancy and have been looking for a Jewish deli for a while to see if they had it on their menu. Jesse does not like like lox, but recently one of his co-workers (who is Jewish) gave him the name of a Jewish deli here in town. I was really excited when he told me and I have been trying to convince Jesse for us to go there (so at least I can order something Jewish!....

There was one hot dog left when this took place:

Me: "Do you want the last hot dog?"
Mr. Dahl: "No"
Me: "Ok, I'm going to eat it then."
Mr. Dahl: "Ok, but you have to heat it up first."
Me: "I thought about eating it raw- I used to do that." *
Mr. Dahl: "I can eat them raw, but you can't. I think we should go to that Jewish deli-
I would order the lox and eat it right in front of you.
I might be gagging while I eat it and probably couldn't swallow, but it might be worth it."
Me: "You wouldn't do that, it would be a waste of good lox! I would probably grab it off your plate and just eat it myself then."
Mr. Dahl: "I've thought about doing it and you can't eat it."

He's sure trouble (which he warned me about before we got married), but I sure love him!

*I know some pregnant women choose to eat sushi, deli meats, soft cheeses, etc while pregnant and I don't judge you, but I choose not to, thus the pregnancy craving that can't be filled. Jesse is really good about reminding me to heat certain foods up before I eat them.
Posted by Natasha and Jesse at 4:17 PM