Wow, what a weekend! I have so much to say and not enough words to express it all...this weekend has been wonderful, sad, reflective, and bittersweet all at the same time.

Friday the 9th-my birthday:
As Friday evening rolled around we were undecided whether to celebrate my birthday out or go for a night hike in Berea as planned (which was the Friday night activity). We decided to go on the hike, and as Jesse came to pick us up, his arms were full of a bouquet of flowers and an ice cream cake from DQ! What a wonderful present!

When we arrived at the Pinnacles, there was an ampitheater which we went to look at...a guy in the group told me to go down the steps to look at it better. When I turned around the group started singing "Happy Birthday" to me. Sneaky Jesse, who told me he didn't say anything about my birthday! It was a nice surprise.

The hike, about 2-3 miles, was a little steep (and muddy) at times, but once we got to the top the view of the city was beautiful and peaceful! Jesse and I had a little bit of time to sit and reflect and it was wonderful. I'm so glad we all went. Once we got back it was about 11:30 and we all decided to save cake for Saturday since we were tired.

Saturday:
Jesse and I decided to head out to the Arboretum (even though it was officially closed due to the football game, he got in because he's the horticulturist there!) to look at the bird house exhibit... we painted a birdhouse together and Jesse wood burned one so we entered them both (it's a fundraiser for them). I have pictures, but I can't find my camera cord! Arrrr. Jesse told me as we were leaving that he hopefully would have my birthday present finished by the evening. I told him I thought the flowers and ice cream cake was my present! 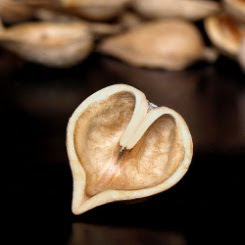 As Jesse was under a tree retrieving a heart nut to show me, he must have bothered a wasp nest since he got stung twice- once each on two of his fingers. As he came back out he told me to hurry away from the tree since a few of them started chasing us. Hurting Jesse- the nerve of that wasp!

After the Arboretum we headed out to Raven Run for a 4 mile hike.
As we were driving there, I mentioned to Jesse that I sometimes miss being a kid and doing kid things like running around sprinklers, bike rides, and playing outside with no cares in the world.

When we got to Raven Run the weather was perfect and it was lovely spending time in nature with Jesse. It took us about 3 hours to go four miles which is pretty slow considering some people run a 15 minute mile... but, in our defense we stopped to play in the streams, look at plants and trees, take photographs, play Three Billy Goats Gruff on some bridges we found ("who's walking on my bridge?"), and pick up buckeyes (which I eventually had to put back. Sad). Jesse took some wonderful nature photographs and also one of me as I was playing in a stream. It was fun how the hike made me feel like a kid again.

After the hike we went to Olive Garden for a birthday dinner. When I got home Brenna, my sister, had presents waiting for me. Such lovely birthday gifts- a pair of fuzzy socks, Twix bars, little notepads, and two wall phrases to hang up in our new apartment once Jesse and I are married.

Later that evening after resting for a little bit, Jesse came back over for ice cream cake and chocolate cake which Brenna made. As he was walking up the steps he was carrying something in his arms....

Post 2 coming soon...hopefully with pictures.
Posted by Natasha and Jesse at 1:01 PM

It sounds like a fun weekend. Nice gifts. (Don't forget to write about how you're able to extend your birthday celebration to last much longer than one day!)

How lucky to find a man who is a "romantic" -crawling around to pick up a heart nut for you (very interesting nut, BTW), bringing flowers, arranging surprises. Really, that is so nice for you, Natasha. Kerry and I just passed 32 years. He has never been romantic, but I knew that going in. ;o)

Natasha-so exciting to "meet" you via Ellen. Please email me at shaunahh at gmail dot com