I Love to See the Temple! 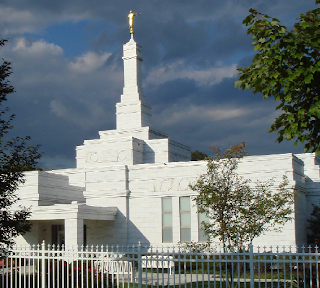 On September 4-5th, 1999 the Columbus Ohio Temple was dedicated by President Hinckley. Today, 10 years later, we commemorated the building of the temple with a fireside here in Columbus. How I love the Columbus Temple!

Before the temple was built, I remember fondly the days of family and youth temple trips to the Washington, D.C. temple. We would leave early Thursday morning and travel all day, then spend most of Friday doing temple work- I would do baptisms (my sister wasn't old enough to do them yet) and my parents would do endowments. Then Saturday, we would do some touring of D.C. and drive back home. But, we were also looking forward to the day when a temple would be at our doorsteps.

I was in attendance when President Hinckley came to the Polaris Amphitheater to announce the temple on April 25, 1998. How excited we were for that announcement! Little did we know, but we soon found out, that it would be built right next door to the building where we attended church. We would be getting a temple right in Columbus! Gone would be the days of driving 8 hours to attend the temple- we would literally have one right at our doorstep.

Each week, after the groundbreaking, we would watch the progress on the temple. How great it was to see the construction on the temple.

A little over a year later, on August 21–28, 1999, the public was able to tour the temple during the open house. I remember that as young men and young women, we took turn helping with the open house by putting booties on those touring it. Any little thing I could do to help, I wanted to be a part of it. I was just so excited for the temple. Then, on September 4-5, President Hinckley came back and dedicated the temple. What a wonderful experience. We had our very own temple, right here in Columbus!! I have great memories of the dedication. As we were waiting outside, preparing to enter the temple, the car that President and Sister Hinckley were riding in, drove up to the front of the temple. As they got out of the car, President Hinckley turned around and waved at us! I could feel the love that he had for us. It was definitely a great experience.

I will forever remember the feeling that I had as the temple was dedicated, knowing that anytime I wanted, I could enter the temple and partake of the sweet spirit that resides there. How grateful I am for the faith and dedication of those who paved the way for us to have the temple here in Columbus.

My heart is joyful.